When Logan Andrews, MSN, APRN, FNP-BC, launched his solo house calls practice Andrews Healthcare Consulting in Trenton, Florida, on October 1, 2021, he started with around 30 patients. A year later, his practice has grown exponentially—as of the date of this interview, Andrews cares for 1,115 patients, and the number keeps climbing. 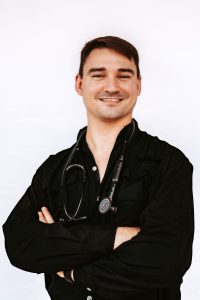 “While I was talking with you today, I actually had six more referrals,” he informed HCCInsights at the end of our conversation, not bragging, but simply to illustrate how high the demand is.

Fortunately, though, Andrews no longer has to handle the large workload alone. Since starting his practice, he recruited two office staff members and seven clinicians to help him cover 14 counties in rural North Central Florida. “I’m growing so rapidly that I needed that much more help,” he said.

Find out how Andrews got started in home-based primary care, his biggest challenges, and how he made his patient list 28 times larger in under a year.

HCCInsights: How did you start your practice?

Andrews: “I’ve worked mostly in long-term care. I was the director of nursing at an 80-bed skilled nursing facility in Trenton, where I had been since 2012. While there, I initiated a rehospitalization reduction program where we looked at patients who were going back to the hospital too frequently.

One of the things I found is a lot of these patients who were labeled as non-compliant weren’t so much non-compliant as they just did not have a primary care physician (PCP) or they were unable to get out to their PCP for one reason or another, whether it was transportation issues or simply not having a PCP in the area where they live.

So, then, when I got my nurse practitioner degree, I said, ‘I want to fill that void.’ It got me into doing house calls.

HCCInsights: Did you hire any specialists for your practice?

Andrews: “Yes. I’m offering in-home pain management. So, I hired a CRNA nurse anesthetist who is post-board certified in pain management, and he’s helping me do a lot of intra-articular injections, trigger point injections, and things like that for a lot of these patients. I also add psychiatry and have a psychiatric mental health NP that provides in-home psych services for our patients as well.”

HCCInsights: “To what do you attribute your practice’s tremendous growth?”

Andrews: “It’s all been word-of-mouth through the different connections I’ve had over the years. For example, I am contracted with the hospitalist group at a nearby hospital, which is how I’m able to see patients at the hospital, and I do get quite a few referrals that way. I am also a preferred provider for Lake City Medical Center and HCA North Florida Hospital, so they send me a lot of patients who do not have a PCP. In addition, many home health care agencies have partnered with me as well—to see patients for them who need face-to-face contact or do not have a PCP.”

HCCInsights: Are there other providers offering house calls in your area?

Andrews: “There are a couple, but they mainly take care of a select few patients. There is also another company in Jacksonville that covers part of Alachua County. But the counties that I cover are so rural that there’s just such a need for it, because the closest providers may be an hour or more away by drive time.”

HCCInsights: Having a thousand-plus patients across rural areas must make it difficult to visit many of them in a day. How do you manage that?

Andrews: “Well, that number also includes assisted living facilities. We are now taking care of six different assisted living facilities that we round on at least once a week between all of us. But typically, I can see eight patients comfortably in a day. There have also been days that I’ve seen as many as 12. It just depends on how close they live to one another. The NPs in my group also have their own patients that they follow, too.”

HCCInsights: Have you encountered any big surprises this first year with your practice?

Andrews: “My biggest challenge was getting insurance credentialing because I’m a nurse practitioner, not a doctor. Some insurance companies, for example, told me, ‘You must be an MD. We don’t grant access to mid-levels. You must have a supervisory physician.’ So, I’d email them back saying, ‘You need to update your policy—that changed here in 2021 and I would file an appeal.’

That’s why I created my company the way I have. These nurse practitioners work for me as a group, and I basically give them a percentage of the revenue they’re generating. In a way, it’s almost like a franchise. By having all these people under my group, it also makes it easier for us to get insurance contracts now than when it was just one person.”

HCCInsights: Are you doing your own credentialing?

Andrews: “I was, but now, one of the people on my team, who has experience doing it, has started helping. In the beginning, I was basically just Googling how to get into networks.”

HCCInsights: Since you’re now just getting credentialing, have you been servicing patients from an out-of-network standpoint?

Andrews: “Oh, yes, 80-90% of my patients were served out-of-network in the beginning. I was unsure about the networks then because I didn’t know how the PPOs or HMOs worked. I was only seeing patients who had a traditional Medicare or Florida Gold Medicaid card. Then I found out I could serve patients in the PPO. It doesn’t matter if you’re in a network; they just have a higher copay. So, I started doing that, and it was like the Hoover Dam busted open.”

HCCInsights: Do you have someone doing your revenue, working your back end and your denials when your claims come in, etc.?

Andrews: “I have someone helping me now who does billing for other physicians and physician groups in the community. She is doing a wonderful job. In the beginning, though, I was doing everything during the day from referrals to scheduling to billing. Then, at night, I was submitting bills and charges.

Now I don’t have to do that as much, so it’s been easier. Some of the private pay stuff I’ll still do now and then, like sending a bill out to a patient. But now that I have office staff, they are handling that for me, too. And then the main person helping me sends me a report every month that breaks down what each provider and the whole group generated.”

HCCInsights: What are some of the challenges that you have faced in operations?

Andrews: “I needed more staff. Interestingly, I joined The Elite NP Group on Facebook, which has a lot of motivational posts. There, I saw one that said, ‘If you’ve ever contemplated hiring someone, just do it because it’s going make your life easier.’ When I saw that, though, I thought, ‘I don’t know if I can afford to pay anybody, how is this going to work?’ But I did it, and now I wish I had hired 15 people months ago. Now, I have enough referrals coming in that I need even more help.

Again, though, the biggest challenge is insurance credentialing. Because, without it, it limits the number of patients that you can see, and also limits a lot of my patients.

I do have a hard time, though, telling people no. For example, some of my patients want to be seen, but can’t afford their high co-pays, so I’ll say, ‘Well, pay what you can, whether it’s $10 or $15.’ By being in-network, obviously, I’d be generating what I should be getting paid. For some of these patients, it costs me more in gas to go see them, but I know that if I wasn’t seeing them, they wouldn’t be getting any care.’

HCCInsights: Have you thought about using a third-party credentialing property?

Andrews: I have, but for some of them, they can’t guarantee that you’re going to get in a network. Also, with each I have seen, it has been thousands of dollars to work with them, and then they want more money. I’ll give you an example: for $2,500, one company will work on your first four insurances, and then it’s $250 or $500 for each additional insurance carrier after that. I feel like I should only pay if I get into a network. But if I’m not, then I’m out of that money, and I’m right back where I started. So, that’s what motivated me to say, ‘For that much money, I will figure out how to do this on my own.’ And that’s what I did.”

HCCInsights: Did you have a strong business background before starting your practice?

Andrews: “Yes, I learned a lot as the director of nursing, running that 80-bed skilled nursing facility, which was a multi-million-dollar organization. Like how to capitalize on the dollar to make a dollar work for you and how to make one stretch. This is especially important when you’re working for a not-for-profit organization like I was, where every dollar matters.”

HCCInsights: It seems like you’re working all the time. How do you take care of yourself?

Andrews: “It’s hard because my business is just taking off. But, because I know it’s important, I try to always schedule certain days off, especially weekends. Sundays are for church and spending time with my family. Also, one of the best things I’ve done is have my office staff handle all my calls for me. I started by downloading Google Voice. My office number is now a Google Voice number, so it rings to all my staff’s phone numbers, and then one of them answers the phone, triages it, and goes from there. They rotate that so I’m not on call all the time. That’s a huge thing because I get enough calls between the hospital and the rehab facilities, and I can’t do it for the office, too.  We also use a group messenger system.

I definitely understand how important it is to make time for myself and my family.”

HCCInsights: Why do you love house calls?

Andrews: “For several reasons. I’m able to make my own schedule, they’re more personable, and I get to spend more time with my patient than I would if I were in a typical office setting.”